Bob Dickson (ボブ·ディクソン Bobu dikuson) is an American sailor from Idaho who works at the New Yokosuka Harbor District.

Bob is a friendly and cheerful person, who is good friends with Tony Abrams and Smith Bradley so often finds himself getting involved in their illegal dealings, even though it makes him a little uncomfortable. When he isn't working he likes to spend his free time playing pool or fishing.

Ryo Hazuki first encounters Bob on his second day of work at the harbor. Bob and other sailors demand Ryo pays up his insurance money that all rookies pay. He refuses and they get in a fight. If Ryo wins, Bob and the others run away scared. But if he fails, they take all of his money. 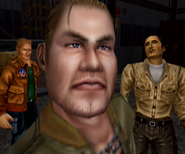 Add a photo to this gallery
Retrieved from "https://shenmue.fandom.com/wiki/Bob_Dickson?oldid=15582"
Community content is available under CC-BY-SA unless otherwise noted.