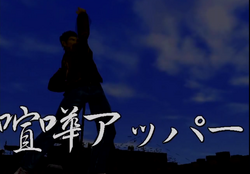 Brawling Uppercut (喧嘩アッパー Kenka appā) is a powerful move Delin Hong teaches Ryo Hazuki when he is trying to obtain $500 to meet Wuying Ren or after he meets him for the first time. Delin taught Ryo the move to help him fight Ren, he's afraid if he helps Ryo fight him, the Heavens will come after him.

If Ryo continues to practice the move, Delin will show him how to do the move again, but when he takes a step back he falls into the sea.

Retrieved from "https://shenmue.fandom.com/wiki/Brawling_Uppercut?oldid=19675"
Community content is available under CC-BY-SA unless otherwise noted.