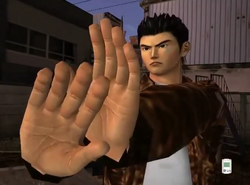 Double Blow (重ね当て Kasaneate) is a powerful move mastered by Shigeo Yamagishi. Yamagishi once taught Iwao Hazuki the move. After Ryo Hazuki has spoken to Tom Johnson about the black car or on the day after the fight at Heartbeats Bar at 3:00 PM through 7:00 PM, Yamagishi can teach Ryo the move at Suzume Park.

Ryo can either accept or decline this opportunity. If he declines, Yamagishi will tell him he's not getting any younger and that he may not get this opportunity again. Ryo then has another chance to accept the offer. If he declines after that, Yamagishi will be disappointed that he could not teach him the move as he wanted to. If Ryo accepts and masters the move with little instruction from Yamagishi, he will tell him that he is truly a Hazuki and that his father would be very proud of him.

The attack is performed by moving forward then concentrating the forward momentum into the arms, striking hard to the opponent's chest area. In practice this involves pulling both legs together swiftly in a standing position whilst thrusting straight into the opponent's chest with open palms. The leading hand will make contact with the opponent first then the reverse hand will finish the attack as the standing position is assumed, putting all the momentum forward in one continuous motion.

Retrieved from "https://shenmue.fandom.com/wiki/Double_Blow?oldid=19673"
Community content is available under CC-BY-SA unless otherwise noted.