"Hold it bud! I went and got it out! So at least take it with you!"
―Etsuko forcing Ryo to take the Hong Kong flier. — Listen (file info)[src]

Etsuko Sekine (関根エツ子 Sekine Etsuko) is an employee of Asia Travel Company and the mistress of Jimmy Yan, the manager of the agency.

After dropping out of a private girl’s high school, Etsuko went to Tokyo on her own to try and make it as a model. She gave up on her ambition after being cheated out of her money by a man pretending to be her agent. Worn out physically and emotionally, she returned to Yokosuka five years ago.

A year later, in a fit of despair, she applied for a job as a tour conductor at Asia Travel Company, but was assigned to be an office clerk instead. Although she was bitter about not being able to travel and almost quit, she started working, and now seems to enjoy it. She has very wasteful spending habits and her debts, due mostly to an over reliance on credit cards, are increasing. Luckily, she doesn't gamble, so her biggest concern is how to pay back the ever increasing debt.

Ryo Hazuki meets Etsuko when he looks to purchase a ticket to Hong Kong at Asia Travel Company. She was very rude to him and was annoyed just by him asking questions about the ticket. When Ryo realizes he needs a boat ticket due to the prices being cheaper, he books a boat ticket to Hong Kong at the travel agency and it is implied that she later stole the cash he used to pay for the ticket. 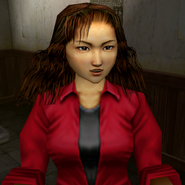 Shenmue Goodies VMU Icon
Add a photo to this gallery
Retrieved from "https://shenmue.fandom.com/wiki/Etsuko_Sekine?oldid=17587"
Community content is available under CC-BY-SA unless otherwise noted.