"Yo bro!"
―Goro approaching Ryo after a day of work at the harbor. — Listen (file info)[src]

Goro Mihashi (Kanji: 三橋ゴロー, Rōmaji: Mihashi Gorō) is a thug who used to attend the same local high school as Akio Enoki and Tetsuya Nagashima, and was the leader of their gang before Akio. However, he was expelled from school when he took full responsibility for the trouble his gang has with other schools' gangs. Since then, he has been wandering around the New Yokosuka Harbor District, extorting money from workers.

As Ryo Hazuki arrives at the harbor he sees Goro picking on a fisherman, Hiroshi Murai and demanding his money with Tetsuya Nagashima. Ryo intervenes, but Goro isn't afraid of Ryo, despite Tetsuya backing off as he knows how strong he is from previous fights. Ryo defeats both Goro and Tetsuya. After seeing how much stronger Ryo is than him, Goro starts to change his ways for the better and helps Ryo out. He starts calling him "bro" and even helps him get a job at the harbor and they soon become friends.

As Ryo becomes involved with the gangs at the harbor, Goro gets beat up by Tony Abrams, although he isn't seriously hurt. As time passes, Goro reveals that he and Mai Sawano, a girl from the area who has known Ryo since they were children, are going to get married.

Although Goro does not appear in Shenmue II, Ryo has the option to tell Shenhua Ling about him during the campfire discussion. He mentions how Goro used to steal money and bully people, but he is actually a nice guy who changed his ways.

In Shenmue III in the second part of the game at the hotel you stay at, you can use the telephone to call Goro in Yokosuka and he and Ryo will catch up. Also in Shenhua's House in the first part at Bailu Village, Ryo can ask Shenhua if she has any friends and she will mention Ryo's friends that he told her about in Shenmue II and he will be surprised that she remembers all of them (although she doesn't mention Guizhang Chen). .

Goro and Tetsuya distracting the guards. 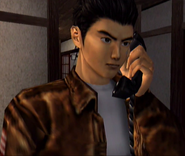 Goro getting on the bus.

Goro's T-shirt design
Add a photo to this gallery
Retrieved from "https://shenmue.fandom.com/wiki/Goro_Mihashi?oldid=19301"
Community content is available under CC-BY-SA unless otherwise noted.