Ichiro Sakurada (桜田伊知郎 Sakurada Ichirō) is a friend and classmate of Ryo Hazuki and Naoyuki Ito.

Ichiro has been Ryo's playmate since childhood. He is one of the few people who knew Ryo's mother. After Naoyuki joined them when they were in the second grade, the three of them often played together.

Ichiro has a rather shallow, idle personality, does things at his own pace and is indecisive. He is scared of heights and hates green peppers. He is very shy and tries to be funny when talk gets serious to hide his shyness. He says he gets tense when he talks with girls. His grades are above average. He is thinking of going on to college after graduation but doesn't have a specific goal in mind. 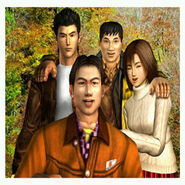 Add a photo to this gallery
Retrieved from "https://shenmue.fandom.com/wiki/Ichiro_Sakurada?oldid=16140"
Community content is available under CC-BY-SA unless otherwise noted.