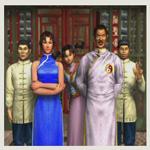 This photograph of the Man Mo Temple crew Xiuying Hong, Hanhui Liu, Fangmei Xun, Jiliang Chang, and Shiquan Fu is given to Ryo Hazuki by Fangmei once he is ready to leave for Kowloon. She mentions that the photo is precious because there aren't many photos of Xiuying.

While in Guilin, Ryo can show Shenhua Ling this photo while talking about Xiuying.

Retrieved from "https://shenmue.fandom.com/wiki/Photo_of_Xiuying?oldid=12357"
Community content is available under CC-BY-SA unless otherwise noted.