Puzzle Productions, better known under its brand name First 4 Figures is an United Kingdom based toy and model company. First 4 Figures produces merchandise statues of well-known licenses, such as The Legend of Zelda, Assassins Creed, Metroid and Sonic the Hedgehog.

In 2013, First 4 Figures produced a statue of the Shenmue protagonist Ryo Hazuki. It was announced on Christmas of 2012. There is also a exclusive edition of the statue which has a Phoenix Mirror base, this edition sold out very quickly. The statues have a scale of 1/6th (12 inches) and the edition size is 750 pieces.

The unofficial Shenmue fansite The Shenmue Dojo made a partnership with First 4 Figures to hold a contest. The contest is the "70 Man Battle" contest and the winner recieves a free regular edition Ryo Hazuki statue.

First 4 Figures put up a poll which asked which Sega character that fans would want a statue of next in the Sega All-Stars line-up. The primary Shenmue antagonist Lan Di was on the list and received the largest amount of votes with NiGHTS from NiGHTS into Dreams... being second. On Christmas of 2014, First 4 Figures posted a teaser image of a Lan Di statue on their Facebook page.

The Lan Di statue was then available for pre-order starting November 3rd, 2015. 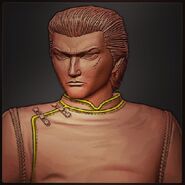 The teaser image of the Lan Di statue.
Add a photo to this gallery
Retrieved from "https://shenmue.fandom.com/wiki/Puzzle_Productions?oldid=13311"
Community content is available under CC-BY-SA unless otherwise noted.