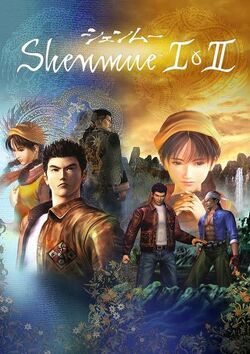 Shenmue I & II is a re-release of both Shenmue and Shenmue II. The port is developed by D3T, published by Sega and was released worldwide on August 21, 2018, and released in Japan on November 22, 2018, for the PC, PlayStation 4 and Xbox One. All versions of the game include a reversible cover and poster.

Yu Suzuki stated he strongly wanted the first two games to be remastered to let Shenmue newcomers play the original two games and be prepared for Shenmue III. It would also preserve the Shenmue series and make it more accessible.

In 2016, a SEGA spokesman said they are currently investigating how to make it a reality, but the issue is primarily with the licensing in the original games.[2]

Later, in September 2016, SEGA Europe registered two domains "shenmuehd.com" and "shenmueremastered.com".[3] It is unknown if these were done because an official project is underway, or simply to take these domain names in advance in case it was.

In 2018, Yu Suzuki Tweeted that there will be many more surprises for fans.[4] When asked about an HD dualogy, he later said, "It's something I can not talk about for the moment."[5]

A month later, on August 3, SEGA announced that the collection would be released in Japan on November 22. A special, Japan-exclusive limited edition for the game was also announced, including the game and a 2-disc soundtrack.

After the HD collection was released, it was revealed that the game almost received a complete remake. However, it was mysteriously cancelled, likely due to budget constraints or concerns with changes to its assets.[7]

In the review by DigitalFoundry, the remaster is said to be a basic and competent port, having fixed some of the issues of the originals.[8] Although some of the fanbase is split on which version of the two Shenmue games are definitive, there are many who consider Shenmue I & II definitive, feeling that the pros outweigh the cons, and the easy accessibility to both games is worth it.

Despite this, it was also noted that while the port is competent, it is not perfect, due to the technical limitations. For example, the 30 FPS cap could not be removed because it was tied to the game engine. Apart from the UI, the textures remain the same, not all cutscenes are in widescreen, characters still pop-in around town, and the voice quality is low, possibly because original voice recordings are lost or were too difficult to program in. The sky in the first game still moves fast when the camera is turned and is made more noticeable due to the widescreen.[9] Some audio quality is also worse, although there is a fan working to restore it.[10]

One of the main issues of the remaster is that it can be extremely difficult trying to learn the combat moves because the game does not directly tell the player what buttons they should press. In the original Dreamcast version, a monitor on the game's controller (VMU) would show the buttons after failing to learn. However, in Shenmue I & II, the player does not get this, so some just resort to looking up a guide.

Upon release, it was discovered that there were plenty of glitches and technical issues, such as cutscene errors, audio glitches, etc, causing fans to compile a list of glitches.[11][12] The game received a day one patch to fix issues, and had a few more patches rolled out to fix issues, although the game's launch on console was criticized because the console patches took longer. It is generally regarded that the PC version is the most stable while the PS4 version is the most unstable, with the Xbox One version being somewhere in between. It is also recommended to make multiple save files in case of some rare corruption.

PC modders found a way to keep widescreen during all cutscenes.[13]

Ryo playing Hang On at You Arcade.

Ryo with members of The Heavens.

Ryo and Wuying Ren hiding from The Yellow Heads.

Ryo and Shenhua talk in a cave.

Ryo looking at the Shenmue tree.
Community content is available under CC-BY-SA unless otherwise noted.
Advertisement