Takashi was born in Hiroshima, in middle school Takashi was heavily influenced by movies. Once he approached a punk to ask him about his tattoos, the punk got angry and beat Takashi up for no apparent reason. Luckily, Soroku Kikuchi, a tattoo artist, who happened to be passing by at the time, saved Takashi from a serious injury.

After this experience, Takashi became interested in tattoos, so he decided to become Soroku’s student. Although Soroku believed that tattoos were really just scribble, but for some reason, his tattoos were in high demand. Believing that tattoos are an art form, Takashi soon became dissatisfied with Soroku’s teachings and when he was 17, Takashi set out on his own. By that time, he could make tattoos quite well and earned a fair amount of money tattooing truck drivers. He traveled all the way to Yokohama and began his own student Shunkichi.

Takashi began living with Asami, a girl with remarkable fair skin. He tattooed Asami and himself with the same exact design, but one day Asami ran away with Shunkichi. After this incident, Takashi started to distrust everyone and moved to Yokosuka to restart his business there. For the past five years, he has been quietly tattooing only those customers who appreciate his designs. 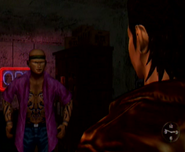 Shenmue Goodies VMU Icon
Add a photo to this gallery
Retrieved from "https://shenmue.fandom.com/wiki/Takashi_Takashiro?oldid=19503"
Community content is available under CC-BY-SA unless otherwise noted.