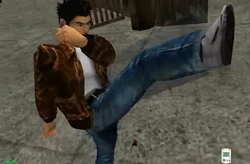 Tornado Kick (Kanji: 竜巻キック, Rōmaji: Tatsumaki kikku) is a move Tom Johnson learned from a friend. During lunch, while Tom's serving hot dogs on the day Ryo Hazuki gets fired from his job at the New Yokosuka Harbor District, he teaches him the move.

Ryo can either accept or decline the opportunity to learn this move. If he declines, Tom will tell him that he can only teach him the move now. Ryo then has another chance to accept the offer. If Ryo declines after that, Tom will be very disappointed. If Ryo accepts and masters the move with little instruction from Tom, he will compliment him by saying that it's "unbelievable" that he learned the move so quickly. Regardless even if the move is mastered with more instruction, Tom will then show him the real extended Tornado Kick that uses a second kick.

The attack is a two-step kick that starts with a jumping high roundhouse kick with the rear leg then maintaining the momentum from the first kick to perform a spinning outside crescent or hook kick with other leg. This move is useful when surrounded by multiple opponents.

Retrieved from "https://shenmue.fandom.com/wiki/Tornado_Kick?oldid=19590"
Community content is available under CC-BY-SA unless otherwise noted.