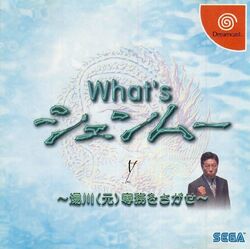 What's Shenmue? (What's シェンムー ～湯川(元)専務をさがせ～, What's Shenmū ~Yukawa (moto) Senmu o Sagase~, lit. "What's Shenmue: Search for Yukawa (former) Senior Managing Director") was a special premier disc in Japan given to those who pre-ordered Shenmue, additionally another edition of the disc was given away in Famitsu, a Japanese gaming magazine. The only difference between the two is that the Famitsu version has an orange cover, as opposed to a blue cover. Due to a delay in releasing Shenmue in Japan, anyone who pre-ordered it was given this on the date it was intended to be released on. The game itself works like a demo of Shenmue, featuring Dobuita, a town in Yokosuka, although not all of it is accessible. You play as Ryo Hazuki much like you would in the full game. The disc also includes 4 of the movies included on the Passport disc of the original Shenmue that explain aspects of the game.

Due to the demo being only released in Japan, there are only Japanese text and voices, so no official translation in any other language was released. However, there is a fan-hacked Japanese Dreamcast version with options for unofficial translated English, Spanish, German or Brazilian Portuguese text available on the Internet.[1]

Ryo is looking for Mr. Yukawa. He asks people around Dobuita such as Tom Johnson and Nozomi Harasaki. He also encounters Enoki and has a QTE battle with him. He eventually finds Yukawa and chases him. They eventually end up at You Arcade. Ryo saves Yukawa from a attacker that wanted a "disk". After that, Ryo and Yukawa talk for a bit then Yukawa wakes up and realizes it was all a dream. His desk is surrounded with Dreamcast boxes. He looks up to see a poster of Shenmue on the wall and then makes a big effort to help sell the Dreamcast console.

CAUTION warning at the beginning of the demo