Scout for the Yellow Heads

To enter the heavily guarded Yellow Head Building to rescue Yuanda Zhu, Kai gives Ryo Hazuki a photo of Yuandao to look for him at street fighting areas, as he will recruit skilled fighters to the Yellow Head Bldg. After Ryo proves to Yuandao who is in the crowds at street fighting events that he is a strong fighter, he asks Ryo to meet him at Dragon Street at dawn. He then gives him three photos of three fighters that he would like him to defeat. They are Chunyan Xu, Greg More, and Rod Stunt.

After Ryo defeats them, Yuandao meets him at Dragon St. at dawn again. He then gives him a map to the underground passage to the Yellow Head Bldg.

Once Ryo enters and meets Yuandao, Wuying Ren comes in and kicks the Scout knocking him out. 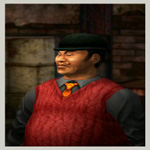 Add a photo to this gallery
Retrieved from "https://shenmue.fandom.com/wiki/Yuandao_Huo?oldid=19660"
Community content is available under CC-BY-SA unless otherwise noted.