Zongquan Bai (Hànzì: 白宗泉, Pinyin: Bái Zōngquán, On'yomi: Haku Sōsen) was a student at the Guang Martial Arts School, but he was expelled by the master Zhoushan Xuan. Zongquan then fell into the role of a street performer. Master Zhoushan feels it is all his fault that he has fallen onto the wrong path.

Ryo Hazuki first meets Zongquan in Golden Shopping Mall when learning about the wude. After he said he came from Japan, Zongquan gets everyone's attention saying that he can smash a rock into tiny pieces. Once he smashes the rock, Zongquan tells him that he used to do martial arts but is now down and out. Ryo then tells him that Master Zhoushan talked about him saying that he was powerless when he expelled him. Zongquan then gives him a letter to give to his master saying "I have broken "JIE", but cannot get rid of tune nor fist".

When Ryo is about to leave Wan Chai to head to Kowloon, he can say goodbye to Zongquan. 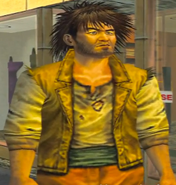 Add a photo to this gallery
Retrieved from "https://shenmue.fandom.com/wiki/Zongquan_Bai?oldid=19658"
Community content is available under CC-BY-SA unless otherwise noted.